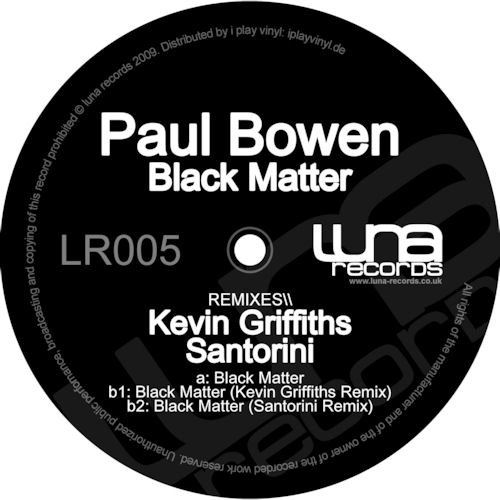 With a burgeoning following taking in just about every DJ worth their salt, the deep and dubby house vibes of Luna are hitting the spot nicely so it makes sense that the man behind it all steps up with his own material. Having co-run and been a resident at the brilliant party that is riffraff in Middlesbrough, Bowen has developed a rock solid reputation as a DJ who delivers bottom heavy hypnotic grooves so it’s unsurprising that his productions follow the same path, both in content and quality.

In it’s original form ‘Black Matter’ is a steady, cast iron groove with an unhurried feel and subtle builds and drops which flow beautifully. With just a filtered chord sequence added the track is warmed and provided with an unassuming yet highly effective hook which makes for a brilliant, uncluttered vibe.

Tsuba Records main man Kevin Griffiths has developed quite a reputation for his production work in the past 18 months and his Basement Dub of ‘Black Matter’ shows why. Equally as simple as the original, it’s a bass and drum groover which is stripped to its bare essentials and given just short of 8 minutes to work itself out, which it does in typically fine style.

Finally Santorini, who has released some fine work for the likes of District Raw, Little Helpers and his own Recycle label, serves up a rhythmic, detailed remix of ‘Black Matter’ characterised by a seductive swing and warming keys.

Luna is winning many a plaudit for its uncomplicated, basement house stylings and this release will do no damage to that reputation whatsoever.