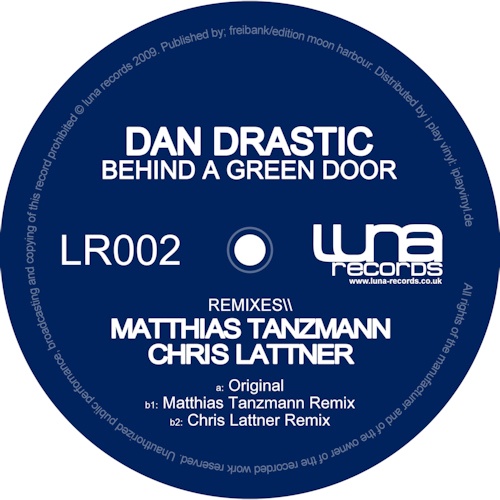 The second release on the fledgling Luna Records label sees Germany’s Dan Drastic set forth with the killer ‘Behind a Green Door’, backed up with stellar remixes from Matthias Tanzmann and Chris Lattner….

Luna Records is very much in its infancy, this being only the label’s second release, that being said the imprint is making it very clear that it means business kicking off with a superbly received Chris lattner single with remixes from Justin Drake and Bearweasel and now following up with a release that is certain to gain attention with the heavyweight names attached.

Dan Drastic has been a DJ and promoter for over a decade, running parties in his hometown of Chemnitz, Germany before moving to Leipzig and hooking up with the esteemed Moon Harbour label. His recording career has really been kick started in the last couple of years and he has seen a rapid rise up the ranks with great releases for the aforementioned Moon Harbour as well as Stevie Kotey’s Hairy Claw and Highgrade.

For ‘Behind a Green Door’ Drastic takes us on a deep and soulful journey into the heart of quality house music, fusing live sounding drums with a solid bottom end to create a superb shuffling rhythm section. The track is layered with rich and swirling synth lines and builds to a spoken word vocal drop before kicking back into its hypnotic groove. This is a quality slice of house that is already finding favour with across the globe.

First of the remixes comes from Moon Harbour and Poker Flat hero Matthias Tanzmann who turns in a production masterclass with his chunky, engaging reworking that grabs you from the opening bars. The simple arrangement brings together the elements of the original in a mix that is rolling perfect and has found favour with the likes of Thomas Schumacher, Ralph Lawson and Sebastian Roya, pure class!

Finally Chris Lattner takes the reins and delivers a deep and bass heavy cut that is a perfect accompaniment to the preceding versions. The speaker shaking bline and percussion provide the perfect bed for the subtle synth stabs and smooth arrangement making this a must have club cut.

A great release from a label that are set to make their mark on the year to come..