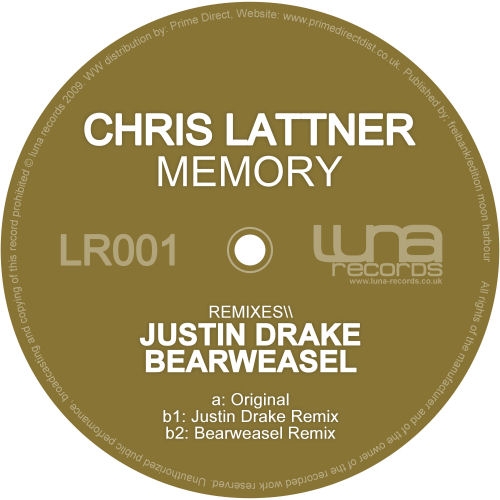 Luna Records is a new UK based label from respected club promoter/DJ/Producer Paul Bowen, the man behind Middlesbrough’s infamous ‘Riff Raff’ events. The label is set to release music from some pretty well established artists with an emphasis on stripped back chunky house music and in that vein the debut single sees the much hailed German producer Chris Lattner step up get the imprint firing in the right direction.

Lattner has been DJ’ing for the best part of two decades, initially gracing the decks at Hannover techno parties before word of his talent spread, seeing him strike out to play across Germany. He has hosted a radio show for Australia’s Pulse Radio, worked as a booking agent for LessIzMore and has had releases on labels such as Einmaleins Musik and WBA. His passion for electronic music has shone through in everything he has done and led him to produce some great records, to which can now be added the Luna debut ‘Memory’.

This single release kicks off with Lattner’s original of ‘Memory’, a solid tech driven slice of house with heavily effected vocal samples and a simple floor shaking groove. This is understated underground house music at its best, deep chunky and highly effective.

First of the two remixes comes from ex-Peace Division man Justin Drake, who builds on the vibe of the original, thickening out the drums and layering some heavy filters over the synth stabs to great effect. A straightforward and highly effective arrangement provides everything that is needed in this excellent reworking.

Finally we have a remix from Bearweasel, who have been providing choice cuts in house music over the last year via labels such as Tsuba, Supernature, Bloop and Murmur. For their ‘Lazy dub’ they take things back to basics and turn in a slab of deep and dubby house with an emphasis on razor sharp percussion and earth moving bass.

This is a superb debut from a label that is sure to become a major fixture in 2010.
Chris Lattner’s ‘Memory’ is released on Luna Records in December 2009.

Alex Flatner Circle Music
The Bearweasel Remix is the one for me…kind of jackin and still groovin but not loosing the vibe from the original..nice work ! will play a

Tristan Da Cunha 20:20 / Back To Basics
Original is hot on this as is the on form Bearweasel mix. Will Play.

Solomun
you got my feedback

Alex Storrer Lexx / Kawabata (Drumpoet Community)
The Justin Drake my is my fave.

Geir Aspenes G-Ha (Sunkissed)
Nice and deep tracks, not really my thing, but i prefer the original. Thank you!

Enzo Siragusa Fuse / Circo Loco
Liking the Chris Lattner and Bearweasel mix. Nice warm up tunes, will both get played at Fuse.

Ed Davenport Liebe*Detail
another dope package. bearweasel dub all the way for me – always a fan. boys boys its a treat!!

So Inagawa
i think it must be great sales! nice tunes.

Sebastian kahrs Sebo K nice remixes!
will play for sure!

Stephen Hitchell Echospace
Get that old Gadgets vibe back again but with a San Fran Deep House flare. Favorite mix here is the Justin Drake mix, nice balance of old school synth progressions, I could see Derrick Carter or Mark Farina beating this at 5 AM!

Stuart Geddes Mulletover / Rekleiner
great mixes but would of been nice to break up the style a little, not much to choose from here.

Lee Jones / Playhouse / Simple / Just
i quite fancy the justin drake mix. bearweasel’s mix is rather hot as well. big up the Staines massive.

Alex Douat Alex Dee (Jetaime)
Beraweasel remix was the pick for me. will def play that cut!

Jay Tripwire
Bearweasel lazy dub for me sir..the original doesnt do it for me,and justins mix is good but not really my bag to dj.

Rick Grant Sick Rick/Fabric/Beats
something good to say about all the mixes here – which is particularly impressive given the original isn’t exactly teeming with elements in the first place. love the drums on mr lattner’s version and the synth chops on the bearweasel mix but drakey’s version has to take the cake – a real belting slowburner of a rework, so it is. look forward to hearing plenty more from luna

Emerson Todd Dirty Bird
i like the org the most here

Christopher Spero Glimpse N
ice stuff thanks. Bearweasel does it again for me thanks X

Chris Duckenfield Swag
NIFTY BW REMIX, SUPREMELY DUBBED OUT AND PISSING DOWN THROUGHOUT

Laurent Garnier
Great mix by Justin Drake . Will play that

Dave Martin Technique / Immigrant
Good to hear BW jackin it up! nice to hear Justin’s mix too – thanks DxM

Tom Craven Back to Front
Not massively in to the original. The Bearweasel dub is wicked, nice low-slung grooves. Does what says on the tin! The justin drake remix is good too. Nice late night haunting track. Overall solid first release.

Eli / Charles  Soul Clap (Wolf & Lamb)
all about the drake mix on some deep trippyness. cant wait to see what this does to people.

Tom  Szirtes Shur-I-Kan
could get into this, nice moody grooves here

Alex Arnout Dogmatik
Quality release, the Bearweasel remix edges it for me tho. Full support

Andy Graham Sei A / Droido
All tracks are great, Justin Drake would be my fav though. Thanks A

Kiki . B-Pitch great!
all the mixes are good, but bearweasel wins for me with those rainsounds creating a great atmosphere!

Claire  Ripley Dessous / Phobic
What an EP to start a new label with! Love all three.

Nils Nürnberg 8-Bit / Dynamic / Bloop
Bearweasel Lazy Dub is the one! Quality stuff as usual! Can’t wait to check this out… Cheerz*

Dorian Paic Raum Musik
not for me this time ! cheers Dorian.

Chris  Gruber Gruber & Nurnberg (8-Bit)
Chris has a run, I love his productions! Lovely track for the morning!! Played the track and it was awsome…

Alistair Wells Perc / Kompakt / Perc Trax
Great release. Good luck with it lads. All mixes strong but Original or BW Dub will get the spins from me. Cheers.

Nic Fanciulli
Will play for sure !

BLM  Fear Of Flying
Been playing this for time now. Nice one 🙂

Florian Kruse NRK/Hynotone/Various
I’m into the original mix! love the shuffle in the groove! Nice one!

Jozif Goodwin Fondation / Hypercolour nice & useful..
as per, Bearweasel is the one for me